“The decoded dream-content is no more poetry than chess notations are poems.”

matter, the cast interlocks
between argument under apology or
single grinder exits underneath machine 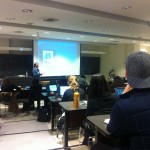 When Dr. Jason Boyd asked me to talk about the ChessBard with his “Narrative in the Digital Age Class” at Ryerson University I was immediately thrilled at the prospect of putting this project in the hands of students and players. While I’ve largely approached the project from an understanding of the history of machine-poetics, the students, despite being co-authors with machines everyday, were still learning the strange and beautiful world of computer-poets. To their credit, they energetically jumped in as we danced through questions of authorship and ownership, all the while opening my eyes to the other paths of the project, the other acts of translation or negation (such as Evthoxia Yannakidis’ proposed “Unwritten Poems of the Pawns”)  that this strange little poem-computer-chess ecosystem generates and the necessary “erratic decomposition” created by each (evolutionary) move. I’ll always be grateful to the class for so generously playing and responding.

The attached digital collection that follows is a true delight. I was a bit nervous when Jody and I turned the ChessBard towards the public as one can never be too certain as to how such things will work once they scale up, even a little. More, because Jody and I had long since given up control over what the ChessBard outputs, I was ecstatic that the poems produced were alternately funny (“global butt,” the last stanza from the ChessBard’s response to Yona Strauss) and beatufiul (Arman Zobiery, playing white: “scrawny equation, injected imagination blackens/opposition, deserted chessboard within/ resistance, a knight, the unequaled”). It is a deeply interesting collection, especially considering all the students played white – I was struck by the overlaps between students but also, too, by how the ChessBard’s voice emerged. There is a lovely consistency across the many multiples that collided in this work that mirrors the dense interweaving (human-human, computer-computer, human-computer) in a 2014 Internet.

So, dear reader, gallop through the text, and when you’re done, play a game or two, add your words and play, and then add some more.